Posted on July 5, 2018 by pvhistoricalsociety

You may remember him from the Bannerman Island tours, or the presentation he gave about Bannerman Island…but Thom Johnson is coming back to Putnam Valley! This time we’ll be learning about the old Cornish Estate, another local (to the county) historical site with an air of mystery and intrigue swirling about. See you on the 14th at 10:00AM!

Posted on May 29, 2018 by pvhistoricalsociety

The first of our scanning dates is quickly approaching – Saturday June 2, 10:00am – 4:00pm at the Adams Corners Schoolhouse. This first session is dedicated to Lake Peekskill – we want to see your pictures, your papers, hear your stories! We’ll also have a small set up of some of our collection that relates to LP. Stop by, meet some of your neighbors, and (maybe) learn something new about the history of this unique part of Putnam Valley!

On June 9th – Our American History: Putnam Valley and the surrounding area in the American Revolution with Putnam Valley Town Historian Dan Ricci! This one promises to be interesting, folks! You’ll definitely leave with a greater knowledge and understanding of what was going on here some 240+ years ago. Please note the time change for this one. We’ll be meeting at 2:00PM, which gives you plenty of time to visit the museum first to check our our exhibit on loan from the Putnam County Historian’s Office – The Control of The Highlands: Putnam County in the Revolution. Also on loan from Mr. Ricci’s private collection are a selection of Revolutionary War era artifacts and replica military items.

Posted on May 19, 2018 by pvhistoricalsociety

Updated 05/20/18 – The power was back on as of yesterday afternoon, so our Revolutionary War exhibit opening and 50th birthday party will be this coming Saturday, May 26th at 10:00AM. We’ll see you then!

As many, if not all of you are aware, this past week a rather damaging storm passed through the area. While our schoolhouse thankfully did not take a direct hit, many homes and properties in the surrounding area did. While cleanup efforts continue and power gets restored, we will be postponing our exhibit opening and 50th birthday party scheduled for May 19th and the museum is temporarily closed. 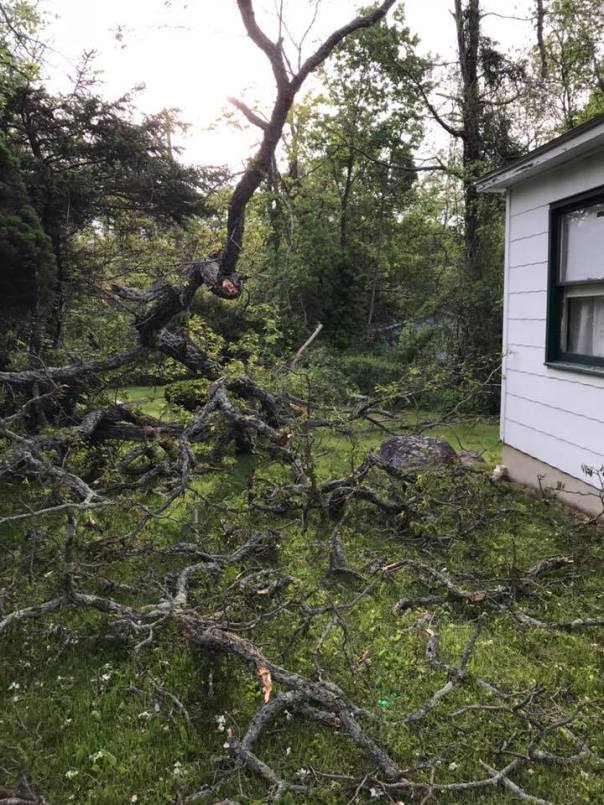 The above pictures are of our side and back yard/garden area. The tree just missed the schoolhouse. A nuisance, but nothing that can’t be cleaned up. Running past the white fence and parallel to the tree is Church Road, a little ways up from where Governor  Cuomo held his press conference the other day.

Unfortunately, our town has become quite familiar with damaging storms in 2018. While the storm on Tuesday didn’t have the devastating impact on the community that the storms in March did, it is still an event that will be recalled years from now when friends and neighbors gather around and “remember when”, sharing pictures and stories. We’re living through some historic times in our town, folks.

We will announce the new opening date for the exhibit in the next few days.

Posted on May 7, 2018 by pvhistoricalsociety

Please note the 1:00PM start time for this one!! Still at the library. 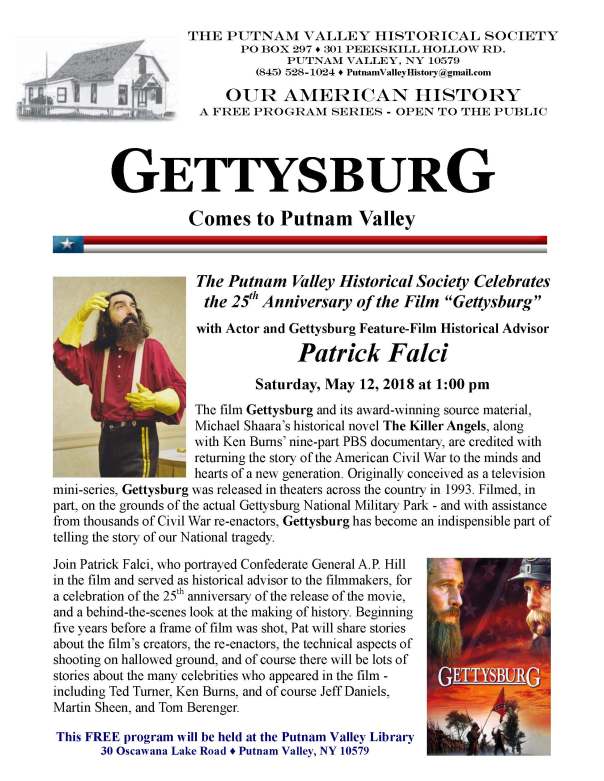 Our next lecture is fast approaching! While last month we enjoyed looking back at a fun time in our past, enjoying the thrill and excitement of an amusement park, this month we look back at a time when our county was severely divided and suffered it’s bloodiest battle during the Civil War. One of the more effective ways of reaching later generations, historical reenactments, movies, and documentaries about the Civil War let us experience a small portion of what was happening in the 1860s.

Posted on April 5, 2018 by pvhistoricalsociety

Lots of fun stuff coming up! 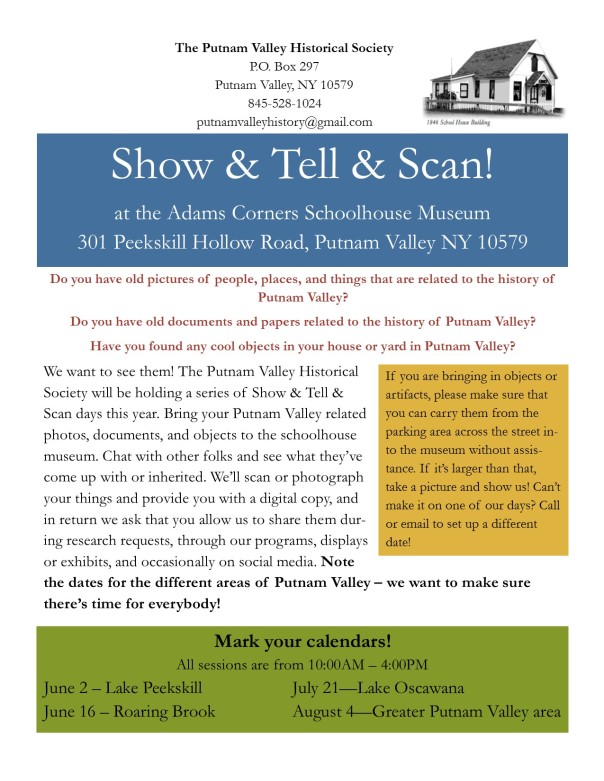 Start thinking about what you have to share with us! Even if you don’t live in the area anymore, if it’s related to Putnam Valley, we’re interested!

Our American History is on April 14th, and we’ll hear all about Palisades Amusement Park. Never heard of it? Not related to Putnam Valley? A predecessor to Six Flags Great Adventure, this amusement park offered wildly entertaining day trips for residents of Putnam Valley and much of the lower Hudson Valley for decades before closing in 1971 (Six Flags opened in the mid 70s). Join us as Vince Gargiulo discusses and shares the Palisades Amusement Park experience. 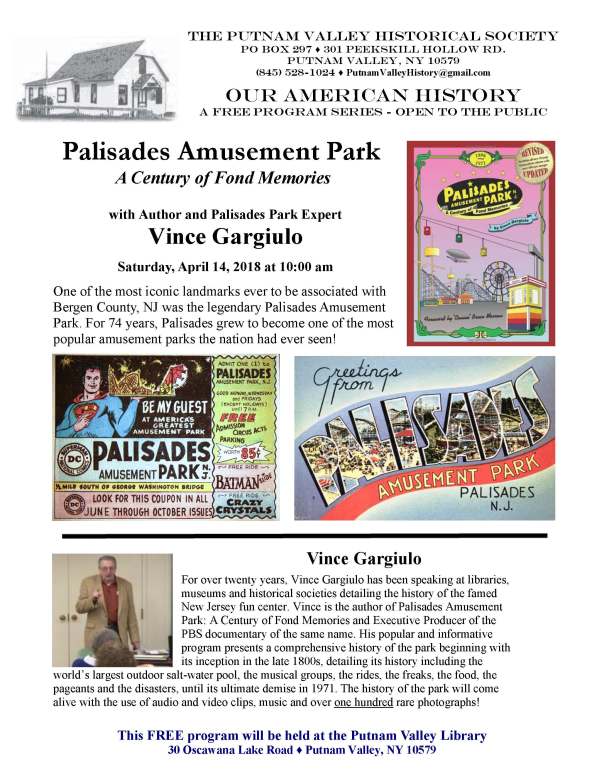 Coming up this season

Posted on March 19, 2018 by pvhistoricalsociety

With much of the area recovering from the series of storms and extended power outages, Our American History made it’s return. We had a small gathering at the library for local author Deborah Rafferty Oswald on March 10 where she shared her inspiration and research methods and materials for her book, The Girls of Haviland. Afterwards she autographed copies of the book. 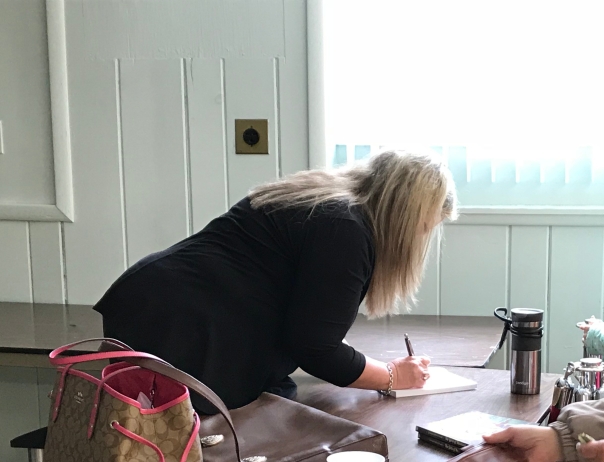 The next Our American History will be on April 14th – Palisades Amusement Park: A Century of Fond Memories with Vince Gargiulo.

We will be holding a series of Show & Tell & Scan days at the museum this upcoming season. We are interested in seeing what old photos, documents (including genealogy documents and records), and reasonably sized objects (i.e., objects that are easily carried from your car into the museum without assistance) you have relating to the history of the town. We’ll scan the photos and documents, photograph all your cool stuff, and provide you with a digital copy. In return, we’re asking that you allow us to share them (with credit) through our programs, displays and exhibits, in response to information requests, and on social media. Each session will be several hours long, so you’ll be able to chat with your neighbors and friends, see what other information the museum may have about your house/family/neighborhood/that old building you’ve always wondered about/etc.

There will be four sessions, split into geographical areas

The dates will be announced shortly, so whether your family’s been here for three or four generations, or you are a newer resident that moved into an old house and found some cool stuff, or have somehow acquired anything related to the history of Putnam Valley, start thinking about what you’d like to share with us! The Where Are We album on Facebook will also be updated next month, so take a peek through there to see if you recognize any of the houses and have any information about them!

And finally….the exhibit for this year will be about the Revolutionary War in (now) Putnam Valley and the surrounding areas. The official opening will be in early May. If you haven’t ever been to the museum, or it’s been a while, say, since kindergarten, this will be a great year to come back. See you soon!

One last note – the building is still winterized. We’ll let everyone know when it’s open again.

The Return of Our American History

Posted on March 1, 2018 by pvhistoricalsociety

Our American History is back for 2018! Join us for our first session on Saturday March 10 as we welcome local author Deborah Rafferty Oswald.

We’ll also be announcing a few exciting things in the next couple of weeks…museum open dates, our 2018 exhibit, and a series of information gathering/sharing sessions. Think…show and tell among residents and community members. If you have old pictures, documents, maps, ephemera, etc… about Putnam Valley and Lake Peekskill, we’re interested in it.

We hope to see you soon!

The year is winding down

Posted on December 7, 2017 by pvhistoricalsociety

The final Our American History program of the year is this coming Saturday, December 9th, at 10:00AM at the PV Library.

Our Holiday Boutique will also be open this weekend. Stop by and pick up a few gifts for your family, friends, teachers, coaches…or reward yourself for all the running around you have to do this time of year! We have something for everyone, and some new items will be here this weekend. 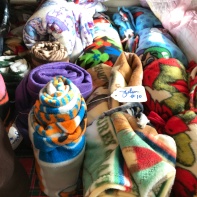 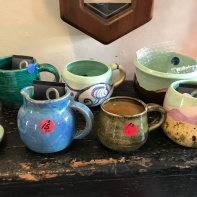 See you this weekend!

Posted on November 26, 2017 by pvhistoricalsociety

It’s that time of the year again – our annual holiday boutique! We still have room for vendors. If you’re interested, send us an email (putnamvalleyhistory@gmail.com) or a Facebook message.

The Return of Our American History

Posted on October 27, 2017 by pvhistoricalsociety

We held our annual meeting at Watson’s Restaurant and Bar on the 15th, and a good time was had by all. Mike Adamovich and Cathy Hanson were welcomed as new board members.

Last night was our Halloween event featuring guest speaker Priscilla Keresy. We tried having a theme this year – an Evening at The Speakeasy.

December’s program will be back at it’s usual second Saturday morning time slot.

Our annual Holiday Boutique is right around the corner as well, December 2-3 and 9-10. Do you live locally and have handmade crafts or goods you’d like to sell? Send us an email – putnamvalleyhistory@gmail.com, and keep an eye out here and on Facebook for updates.

March 2020 – All in person events postponed at this time

Getting our ducks in a row so we can welcome visitors again. It’s no easy task! These five feathered friends are a recent donation from a home on Lake Oscawana. #putnamvalleyhistory
The year....1915, 1916, or 1917. The place...looking towards the future site of the Bear Mountain Bridge!
Found in a closet at the schoolhouse.
Putnam County Memorial Day Convoy passing in front of the museum at Adams Corners.
Signs of the times here in Putnam Valley. Stay safe, stay home, and wash your hands! We’ll see you (hopefully) over the summer. #localhistory #putnamvalleyhistory
We’re holding our annual holiday boutique at the Putnam Valley Library this year. Here until 4:00pm today, and 10:00am - 4:00pm tomorrow. One weekend only! #shoplocal #supportlocalhistory #putnamvalley
Follow Putnam Valley Historical Society on WordPress.com
Loading Comments...
Comment
×